St. Stephen’s Basilica, or Lipót City Parish Church based in Vörösmarty Square … is named after St. Stephen, the founder of the Kingdom of Hungary, whose incorruptible right hand, known as the Holy Right, is kept here as a relic.

Famous masterpieces in the church include statues by Alajos Stróbl as well as a painting of St. Stephen offering his country to the Virgin Mary by Gyula Benczúr. 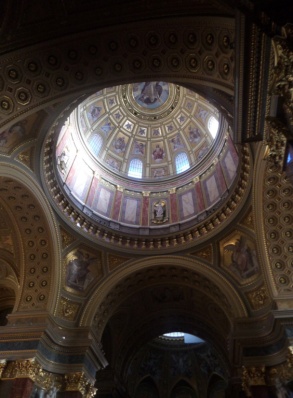 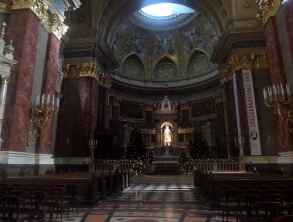 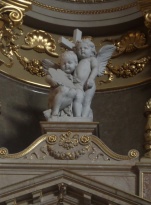 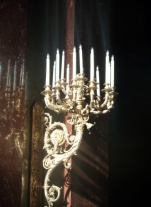 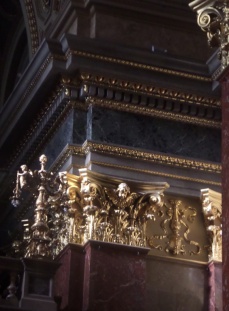 As a functioning church, please be respectful to any services that might be taking place during your visit as well as taking notice of any areas that may be off limits during these periods.

St. Stephen’s Basilica is free to enter although donations are most welcome and is open throughout most of the day either closing around 7pm, or sunset depending on the time of year. Whether you enter from the left or the right through a set of double-doors you instantly step into a large, open chapel area that reaches far into every direction except the one you came from. Taking 54 years to build from start to finish, the Basilica is contains so many intricate features and details that you will simply be stunned, unsure whether to move on from one or venture further, losing yourself inside and in time. I’ll admit, I admire many forms of art and I could spend ages just taking everything in to the frustration of my travel companions. Oh well…

The photographs in this post doesn’t give the Basilica any justice, you will just have to see it for yourselves. The Basilica is virtually impossible to ignore wherever you are in Budapest as you can pretty much see the dome from every part of the city, one of the tallest buildings in the capital city, none are taller than this.

Hidden away at the back of the church in a room off from the main chapel, the Holy Right Hand is a relic that is believed to belong to St. Stephen, the founder of the Kingdom of Hungary and that this Holy Right Hand holds miraculous properties. Why just the right hand? Due to its believed powerful nature it was detached from St. Stephen’s body not long after he was buried and subsequently stolen. It took a few centuries before the relic was returned to Hungary, after being discovered a couple of centuries earlier in another country and travels to many others. It wasn’t until 1950 that the relic was placed in the Basilica for safe keeping, put on display for the first time in 1987. For a more detailed history, just visit the St. Stephen’s Basilica website.

Donations are very much encouraged and you will notice that most people will donate some money before accessing this section of the Basilica compared to the donation boxes at the entrance.

Upon seeing the Holy Right Hand and the casing it rests in, I was surprised my how small the display was even though that a hand is small – The casing is not large in size but rather its grandeur is in the design and materials indicating the significance of the contents on this alone. Tucked away in a small corner of the room hanging on the wall, you could be mistaken for thinking that upon entering that a much larger display next to an alter is the relic, but it isn’t. There are benches for people to come sit and pray, but keep going and you’ll see the Holy Right Hand of St. Stephen. The room was that busy when I was there but this can fluctuate throughout the day.

Unexpectedly, as we came out of the Basilica we found ourselves comfronted with a crowd of people looking up at us from the bottom of the steps – “What’s going on?” we asked ourselves, looking behind us to discover that a light show or rather a story was being projected onto the front walls of the church. Joining the crowds, the story lasted for a few minutes as small and large figures danced around the changing images and environments with the accompaying music. Pleasant and beautiful.

This seemed to happen every night if we were in the area at around sunset but I am not sure if it happens every evening or just something for the Christmas Market. If you know the answer, let me know in the comments!

One of the towers of St Stephen’s Bastillica, Budapest, Hungary

‘Visitors to the Budapest Advent and Christmas Fair in Vörösmarty Square (13 November 2015 – 6 January 2016) will discover a huge range of fine gastronomy and applied art products together with seasonal programmes.

Visitors to one of the most imposing squares in the capital, which hosts the Budapest Advent and Christmas Fair – ranked among the 10 most attractive fairs in Europe – are welcomed with outstanding quality products and plenty of high standard cultural and children’s programmes… attracting 300-400,000 tourists annually.’

There is not a better place to be to soak you the Christmas/New Years atmoshpere than at the Budapest Advent and Christmas Fair in Vörösmarty Square, though their are Market Stalls spread out in other smaller squares just a short walk from the main arena.

If you are one always wanting to explore local dishes, drinks and snacks then this is your destination and one where I visited a lot – Inenvitable due to its location but it was never a let-down. Lots of people, wonderful smells in the air and the spirit of Christmas and the anticipation of a new year, a new beginning.

Gulyáslves (Goulash Soup – Pictured in the bread bowl) is a very filling meal and coupled with a bread bowl and lid, I would be very surprised if you managed yo eat it all. I tried on three occassions and got so close on the third, but.. no. Super filling! It kept me going throughout most of the day and that’s a good thing. Try it at least once, sit down at the numerous benches and tables in the area and enjoy!

Other Hunagrian meals that you can try at the market include: Lángos, Halászlé (Fisherman’s Soup), Pörkölt (Stew), Hortobágyi Palacsinta and Túro Rudi. Of course, there is much more but dive in! Eating locally not only helps the local population but you can often see if being made in front of you and is more cost effective than featuring well-known global brand establishments. 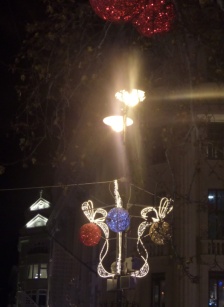 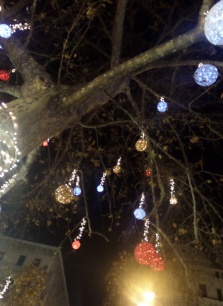 The capital city goes all out to decorate the streets, buildings and all around and with bulbs everywhere it is of course best to see at night! 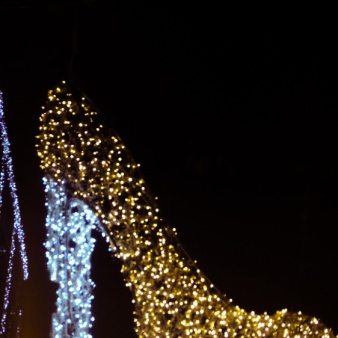 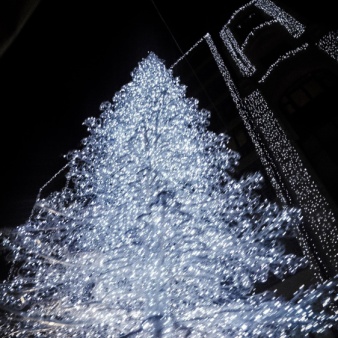 Vörösmarty Square is conviently located directly in front of St Stephen’s Bastillica, a stones throw from many other toruist attractions and a short walk from Chain Bridge, one of many bridges that connect the districts of Pest and Buda over the River Danube.

The card provides access to a set of services designed for tourists visiting Budapest. An official product of the city, it enables the holder to use reliable, selected tourism services free of charge or at a reduced price, including the free and unlimited use of the public transport system, free entry to museums and baths, and reduced-price catering and cultural.

This is where our journey began, or rather this was one of the products of our researching and planning stage before we flew out to Budapest for 6 nights over the New Year period. Narrowing down what we wanted to do, automatically discounting our arrival day, departure day and New Years Day from our trip we determined where we wanted to go discovering that with this card they were either free or discounted and unlimited use of the public transport system (Bus, Trams and Trains) – Yes please!

This card is one useful gem, purchasing a 72 hour card (9.405 huf / £23.63) which started the day after our arrival, our adventures began, most of which you will see featured on upcoming posts on this blog so keep an eye out for them with a mention for the card or the image featured above.

The list of places, attractions and events where you can use your Budapest Card is long, so rather than listing them on this page, I will direct you to another (Hover over ‘Services’ to access more for drop down menu) . Whether you have plans, no plans at all or they change… pick up a pocket guide when you pick up your Budapest Card at various pick-up points across the city (including the airport) and keep it handy!

As we always happened to be there whilst the Christmas Market was on, we also received this little gem:

Free mulled wine and unexpectedly get to keep the mug!?! Saved and redeemed until late on New Years Eve 🙂

Do I recommend the card? Yes! I advise that you do your research before hand on places where you want to visit as well as where you are staying and which card (24h, 48h or 72h) would best suit you and your price range. It worked for myself and my friend, but that doesn’t mean it works for everyone.

You may find this a little bit strange that the first ever tip, trick and hack I post on this blog is about ear plugs. Personally, I have found them to be a life saver or rather a sleep saver as life is never fun when you are always tired.

Personally, I am a light sleeper. I can wake up to pretty much everything whether it is light or sound. At home, I have a black out blind on my bedroom window but also have the tendency to sleep with the duvet over my head at home or away, as for sound… My phone alarm is set to vibrate, no ringtone because I will wake to it going off. Never slept through an alarm, ever. The only time I sleep through things is if I’m ill or have had a few nights of poor sleep that my body needs it, or strangely if I have been swimming but that’s more to do with chlorine which I am a bit sensitive too.

Anyways, since purchasing 20 pairs for the grand price of £2, I carry them everywhere whether I am travelling in my home country or abroad, using them in both hostels and hotels as I struggle that much. They are great for concerts too! Most people in shared accommodation are courteous to other guests at any time of day or night, but this isn’t always the case.

If you are lucky enough to be one of those people that can sleep through everything or almost everything like one of my travel buddies, their will come a time and a place when this doesn’t happen for whatever reason. My last trip with one of my travel buddies is a testament to that and we have travelled a lot together, visiting many places in Europe and sharing a bunk bed meant that if one person was struggling to sleep, often the other knew about it. Therefore I recommend always carrying a pair whatever kind of sleeper you are -Actually carry 2 or 3 pairs, just in case. Some of my 20 pairs I have given to others and they work a treat, or so they say! Foam earplugs are the most popular but after a while, they lose elasticity so an extra set is useful if this happens to one earplug or both.

Let me know of your experience with ear plugs or let me know if you give them a try!